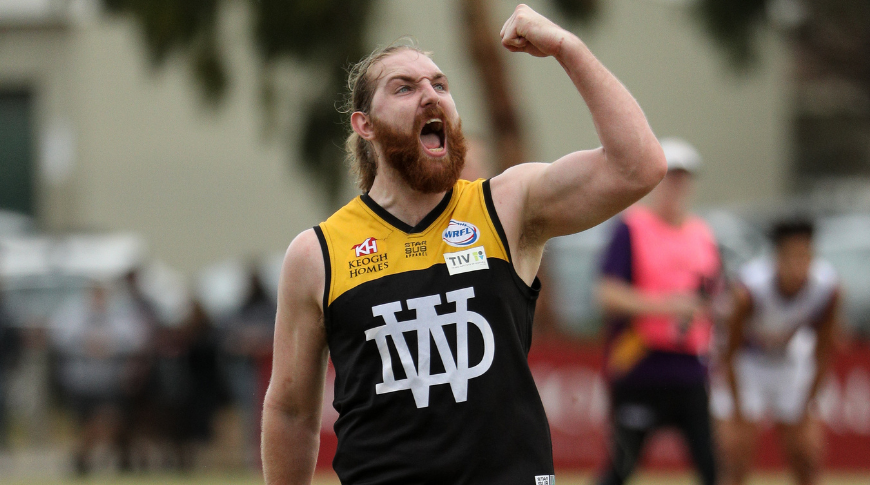 Round 11 of TIV Division 1 football brought with it another weekend of brilliant football, highlighted by Werribee Districts’ powerful 68-point win over Hoppers Crossing.

In what was expected to be a close encounter between second and third on the ladder, the clash certainly started out as such. Through some inaccuracy from the Tigers, and flashes of both contested efficiency and forward brilliance from Jack Dorgan, Werribee Districts held a slim 11-point lead at half-time.

What followed in the third quarter was nothing short of brilliance from Chris Gillham’s side. The Tigers slammed on seven goals to three behinds in the term, with Andrew Panayi’s forward class leading to five goals for the match, and Daniel Nielson’s vice-like-grip leading to four majors of his own.

With Lachy Rainbow holding TIV Division 1-leading goalkicker Brenton Payne to one major for the day, the Werribee Districts defence restricted Hoppers Crossing to three goals for the afternoon, leading to a comfortable win. The margin has now helped the Tigers leapfrog Altona into first position, after Spotswood’s upset win over the Vikings by 19-points.

Grant Williams and James Beilby helped the Woodsmen out to an 18-point lead at quarter-time, while inaccuracy continued to plague the Vikings right through the afternoon. Altona finished with a miserly 3.15 in front of goal, with their poor conversion costing them dearly.

Spotswood head to Keogh Homes Oval to take on new ladder-leaders Werribee Districts, while the Vikings will hope to bounce back from their second loss of the season, when they take on rivals Deer Park.

The Lions are fresh off an impressive performance against Yarraville Seddon, taking down the Eagles by 38 points. Jack Redpath booted four goals while Aaron Britten and Spiros Amarantidis were terrific for Deer Park. For the Eagles’ slim finals chances to remain alive, they will need to return to form against St Albans next weekend.

The Saints are coming off their own disappointing loss, going down to Caroline Springs by five points. St Albans stormed back into the game during the second term to take a ten-point lead at half-time, through the likes of Stephen Heppel and Jayden Kretiuk. However, the Lakers came home the strongest, kicking four goals to two in the second half, led by a Stephen Brewer masterclass.

Caroline Springs will also aim to keep their September dreams alive next weekend, when they take on Point Cook, who have their own battle with relegation. The Bulldogs weren’t able to stop a resurgent Sunshine, going down to the Kangaroos by 26-points. With three wins on the bounce, Sunshine will look to finish the home stretch of 2021 strongly, starting with a clash with Hoppers Crossing next weekend.