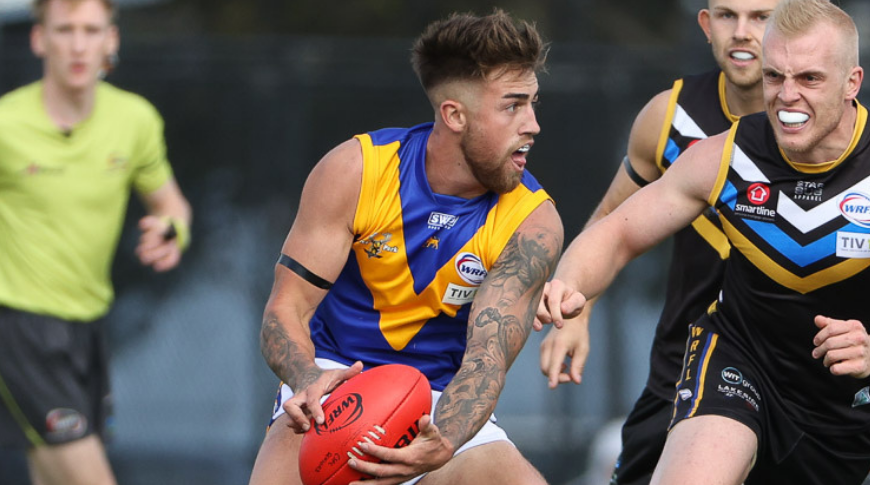 TIV Division 1 action graced Yarraville Oval for the first time, with a packed crowd welcoming the sight of 2019 Premiership flags for both the Eagles’ Senior and Reserves sides. However, that’s where the celebrations finished, as Caroline Springs defeated Yarraville Seddon by 45-points.

After the Eagles debut Division 1 performance ended with a win over Sunshine last weekend, the Lakers were quick to give Yarraville Seddon a welcome to the top tier with a dominant performance.

A strong first half for Caroline Springs was set up by a combination of their height advantage and leg speed, with Liam Reid owning the ruck contests and Stephen Brewer a force at the stoppages.

While the Eagles fought back in the third term and were sparked by moments of brilliance from Liam Holt-Fitz, Mutaz El Nour and the Lakers defence were able to consistently repel Yarraville-Seddon.

Pressure and pace were a feature for Caroline Springs, as Brewer and Keenan O’Shea were constantly able to find multiple options up forward, with four multiple goal-scorers for the Lakers.

Jy Lambley led the way with four majors, with Caroline Springs running away with the contest with a six-goal last quarter, in an impressive performance over the newly promoted Eagles. Next week, the Lakers host St Albans, while Yarraville Seddon will take on reigning premiers Deer Park.

The Lions were back to their seven-time premiership winning best as they knocked over rivals Spotswood by 11-points. After a close first half, it was Spotswood who held a slim six-point advantage at three-quarter time. Unfortunately for the Woodsmen, it was Deer Park who were able to score three goals to zero in the last quarter to secure the win, through a brilliant Nathan Knuckey performance.

It is the first time since 1982 that Spotswood has lost the first two games of the season. They take on Altona in Round 3.

The Vikings were able to put together another impressive display, defeating Hoppers Crossing by 47-points. After the Warriors held an 18-point lead at quarter-time, Altona were able to flick the switch and kick 13 goals to the Warriors’ two, in a commanding display of firepower.

Mitch Norton starred up forward with three majors, while Jayden Post was able to shutdown Hoppers Crossing at the other end, despite Corey Muscat’s strong play for the Warriors. Hoppers Crossing will hope they can recapture their first-quarter form when they take on Werribee Districts at home next week.

Werribee Districts were far too strong for Point Cook, knocking over the Bulldogs by 154-points. Trent Lee kicked six goals, while Andrew Panayi starred in a four-goal performance.