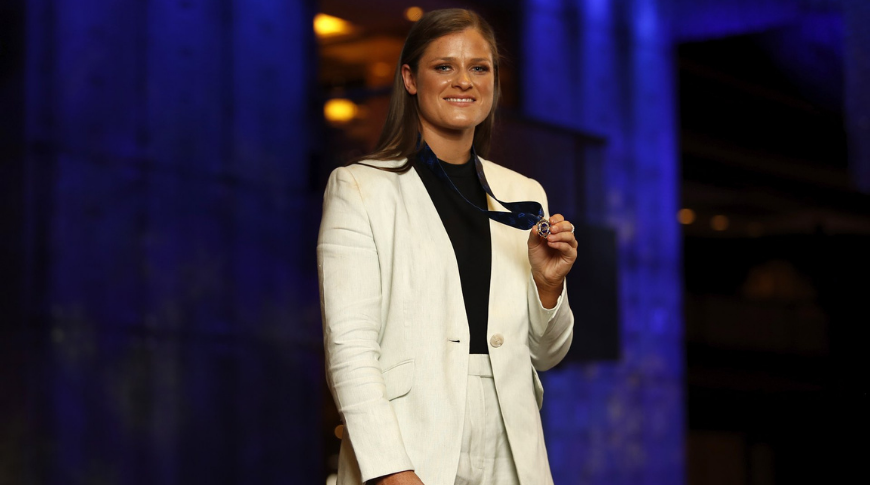 The All-Australian skipper tied on 15 votes with Fremantle star Kiara Bowers to take out the prestigious honour.

Davey played more than 60 games with Port Melbourne Colts as a junior in the WRFL, before crossing to soccer, where she represented Australia in the Young Matilda’s team.

The talented player’s love of football always remained and in 2017 was selected by Carlton as a marquee player in the AFLW’s inaugural season.

“Football can be a rollercoaster of emotions. There can be some very big highs and some very low lows. I came across from soccer and people questioned that, and at times I did think, ‘Did I make the right decision?’,” Davey told the AFLW website.

“I think this solidifies that I have. I always thought I had made the right choice, because I love footy so much, but this sort of thing gives you a bit of recognition and shows that hard work pays off.”

Davey captained the Blues for two seasons before being traded to Collingwood in 2019.

She has an impressive list of achievements in the AFLW competition, having won Carlton’s Best and Fairest award twice and was named in the All-Australian team in 2017 and 2021.

Last week, she was also voted the AFLPA MVP for this season.

Garner played football with the Yarraville Seddon Eagles as a junior before going on to play with Braybrook for a brief stint and St Albans.

Bonnici played with St Albans in 2012 and represented the WRFL in the Youth Girls team at the Junior Metro Championships six times. She also won the WRFL’s 2013 Youth Girls Best and Fairest award.