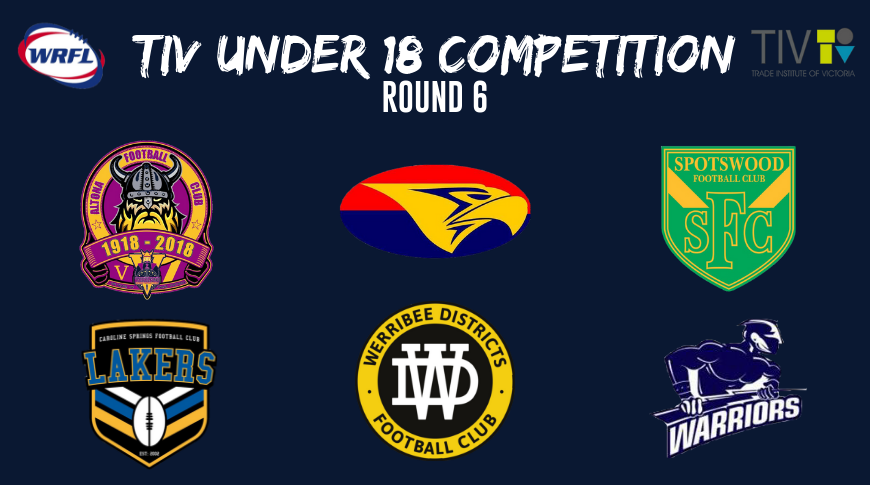 Seeing is believing and Round 6 of the WRFL Under 18’s produced five stunning victories from teams with genuine premiership aspirations.

The Eagles were dominant all day and produced the highest scoring second half of the season, kicking a remarkable 19 goals in a ruthless display of spread, pace and offensive flare.

The statement win was highlighted by 16 goals between Ben Doll (9 goals) and Mohammed Haddara (7 goals), while Lachlan Green and Darcy Grieves provided exceptional run and carry all game.

As remarkable as the Eagles victory was, the lopsided margin would turn out to be a sign of things to come.

Third-placed Caroline Springs produced their own dominant display of force, defeating a Werribee Centrals side fresh of their Round 5 bye, 33.21 (219) to 1.2 (8).

Like the Eagles, the Lakers used a dominant second half (17 goals) to claim the percentage boosting win and were exceptionally led by Damon Cardona, Mason Bawden and Mutaz El Nour who kicked four goals apiece, while Joshua Iglesias and Dylan Hurlston both performed strongly.

Regan Vesty was busy all day for the victors, while Bilal Chehade (8 goals) and Ezzat Haddara ( 4 goals) kicked 12 goals between them.

The Vikings would use a strong third quarter (22 points to 6) to break away from District 2, after a strong second quarter fight back from Werribee brought the deficit down to two goals.

In the final game of the round, 8th placed Spotswood claimed their second win of the year, defeating St Albans by 84-points.

The victors were well represented on the scoreboard by Harrison Newitt, Patrick Dragovic and Abdul El Houli (3 goals each) who kicked 9 of Spotswood’s 16 goals.

A live look at the ladder shows Werribee Districts 1, Caroline Springs and Altona, all battling it out for the league’s best record at 5 wins a piece, while Yarraville closes out the top four with a 4-1 record.

Flemington had the bye.