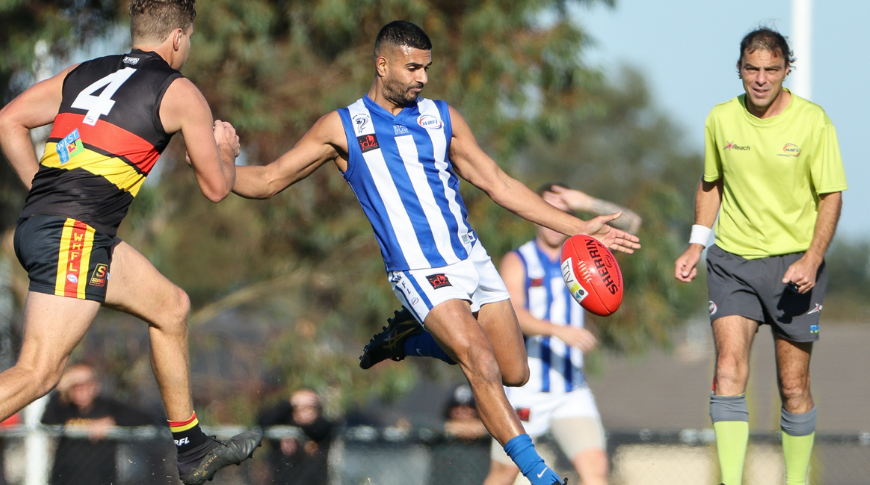 Albanvale has secured top spot after a tight one-point victory over the Suns at Goddard Street Reserve in the Alan Mance Motors Division 3 competition.

The Suns had the ascendency early, booting the opening three goals of the game.

However, a spirited fightback from the Cobras now sees them remain undefeated after six rounds of footy.

Albanvale co-coach Andrew Bryson said he couldn’t be prouder of the victory.

“It was a real arm wrestle, we felt we had enough of the football in the first half but struggled a bit in the forward half,” he said.

“For the players to find a way to win, it’s really pleasing.”

Daniel Backus and Dalwinder Mundi continued their strong form for the Cobras with outstanding performances.

“Backus is super, hard at it, uses the footy well,” Bryson said.

“Mundi was pretty good off half back, intercepting and using the ball really well.”

Bryson also credited the games of Daniel Montrose and Darren Borg, who played their roles superbly.

Albanvale have the bye next week, while the Suns play Sunshine Heights.

The Dragons had a 91-point victory over North Sunshine, as Colby Blyth kicked seven majors and Giovanni Raffaele booted four.

Raffaele’s performance was best-on-ground, while Leo Eliepa was also exceptional for the Dragons.

North Sunshine move to face Braybrook next week, who are coming off a 67-point triumph against Tarneit.

Matt Turcinovich bagged five for the Brookers, while Brayden May kicked three in a best afield performance for Tarneit.

Tarneit face Laverton next week, with both sides eager to score their second win of the season.