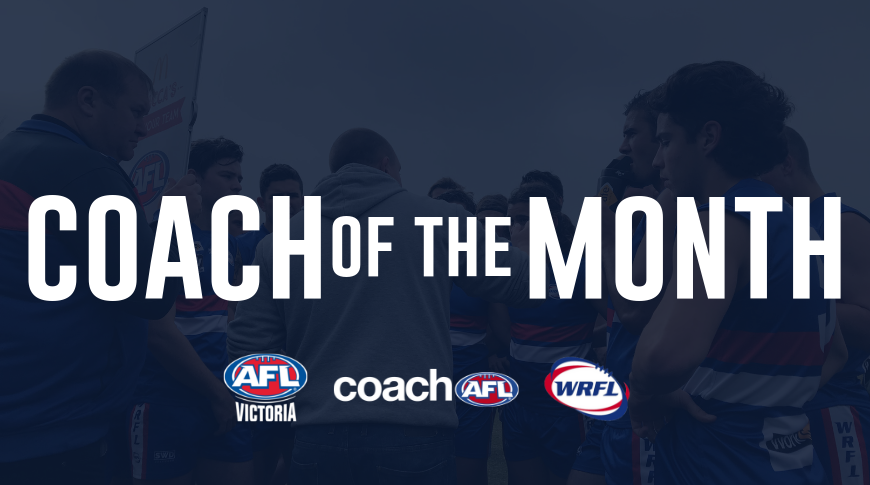 COACH OF THE MONTH – JULY

The AFL Victoria – WRFL “Coach of the Month” in the Junior, Youth and Senior Age Groups for July 2019 have been announced.

Jason Bakker has been a fantastic coach this year, prioritising fun and development for his team. Jason has shown huge dedication to this role and given it a wealth of his time and energy. Employing language and games that has made learning the basics of AFL football easy for his Under 9’s team, Jason has created a welcoming and safe culture for the team. Jason regularly goes above and beyond in his role for his team and inspires the team on a weekly basis.

With nominations coming from both Williamstown and other competing clubs it’s clear Jason has made a positive impact in the junior league.

Richard is a great person to have around the Flemington Junior Football Club, respected by many across the league he has created a fantastic culture for his team. No-one could some up his dedication better than one of his players:

“Rich’s dedication and individual player support towards myself and my other players. This is my first ever season of football. Initially, I had no idea how to kick, mark and tackle. With Rich’s mentoring, skills, determination and valuable time he has been able to turn in me from a 17-year-old with no football skills to a player that is progressing every week and is starting to see hard work pay off by the progress seen week by week! Thank you for your time and consideration.”

Rob Telfer players describe him not just as their coach, but also as their friend. Rob cares not just for his side but for the club as a whole and has completed a mountain of work to ensure North Sunshine Women’s team survives. Creating a welcoming and safe environment and treating everyone equally keeps his players coming back each week and thoroughly engaged. Rob displays a huge amount of loyalty and commitment to the players, the team and the club and is a positive guiding force in good times, and bad.

All winning Coaches will receive an AFL Store Voucher for their efforts and go in for nomination for the 2019 Coach of the Year.

Thank you to all who took the time to fill out a Nomination! We received some outstanding applications and goes to show that Western region footballers are in great hands.

The nominations for the AFL Victoria – WRFL Coach of the Month for the Month of August are now open! Click here to Nominate a Coach.