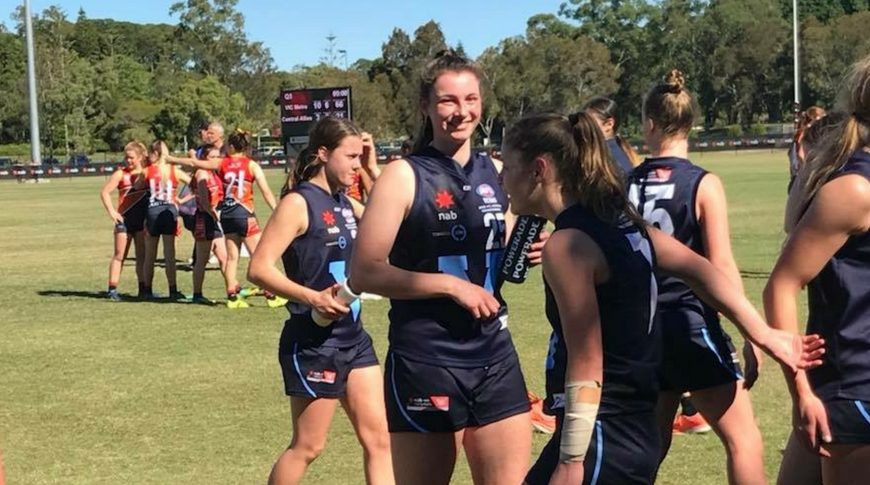 Wyndhamvale young gun Cleo Saxon-Jones says she felt honoured to have been involved in the recent NAB AFL Women’s Under 18 Championships.

The talented footballer was involved with the Vic Metro team as a bottom age player.

Saxon-Jones said she was proud to pull on the jumper and play alongside and against some of the best Under 18 players in the country.

“It really means a lot,” she said.

“It was a great experience and insight showing what it’s like to play an elite level of footy, and the professionalism required to play at the highest level.”

Saxon-Jones only started playing footy at the age of 13.

She is more than making up for her late start, having played for Vic Metro during the Under 16’s carnival and now with the Under 18’s.

Saxon-Jones has played with the Western Jets in the TAC Cup competition for the past two seasons.

“The experience of being involved the last two year has been great, the relationships i’ve built with the girls, I know will last a long time,” she said.

“Without playing with the Jets there would be no way I would be playing for Vic Metro, and I’d like to thank the coaching staff and our Female Talent Coordinator, Claudia Davey for guiding me along the way.”

Saxon-Jones has also been one of the rising stars of Wyndhamvale’s Under 18 team, having been involved in their premiership victory in 2017.

She has played four games for the Falcons this season and with the team sitting in third spot, playing off in another Grand Final is a real possibility.

“I hope that Wyndhamvale play in the grand final again this year and go back-to-back premiers would be nice,” Saxon-Jones said.

“My Dad is the head coach at Wyndhamvale this year. it definitely has its highs and lows, but the long talks we have after the games and throughout the week about footy is something I really enjoy.”

Saxon-Jones said it would be a dream come true if she were to get drafted by an AFL club.

“The main points that I need to do now is stay fit, have a big year next year and hope I do well in TAC and do enough to get picked for Vic Metro again, I can only keep improving.”