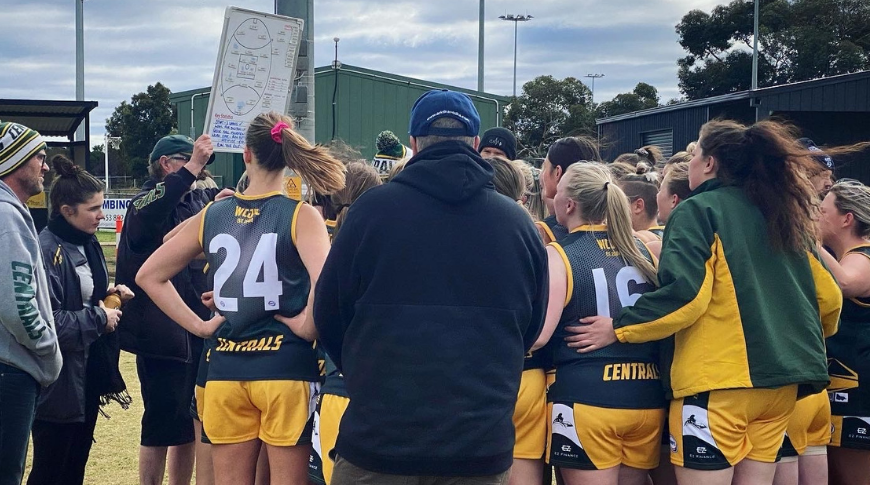 Round 5 brought more big scores and physical, pressure-heavy plays in the VU Polytechnic Senior Women’s competition. It was certainly the latter out at Galvin Park on Sunday morning, when Werribee Centrals took on visitors Point Cook Centrals in a game marked by strong defensive pressure.

Coming off a bye in the previous round, Point Cook Centrals were out to impact the game from the first bounce. Their hosts Werribee Centrals were keen to cement their status as a top-five contender, after their huge win over Braybrook/Albanvale.

In the opening minutes of the first quarter, Point Cook Central’s Kaitlyn Galea was on the receiving end of a brilliant boundary snap from captain Ebony Watkins, and converted the set shot to see the Sharks hit the scoreboard first.

Not easily rattled, the Centurion’s returned fire almost immediately, via Peta Theodorou, to level the scores. At the break, Werribee Centrals held a slim lead.

Despite being forced back into their defensive 50 for much of the term, Point Cook Centrals efforts at stoppages were not to be underestimated. The halftime siren saw the scores locked at 32-6 in favour of Werribee Centrals.

The Sharks brought it to their opposition in the third term — repeatedly foiling the Centurion’s attempts to execute a runaway win, thanks to their strong pressure across the ground.

Both teams were locked in a furious physical battle in the fourth quarter, with Werribee Centrals kept to just three behinds, thanks to some solid bodywork from Hannah Duff in the Shark’s backline.

In other results, Spotswood went head-to-head with Caroline Springs, with the top side maintaining their winning record in a 67-point win over the Lakers.

Caitlin Pretty bagged the only goal for her side, whilst Spotswood shared the scoring glory with six individual goal kickers.

Point Cook had a narrow win over Braybrook/Albanvale out at Saltwater Reserve, with just four points separating the two teams at the final siren.

North Sunshine got their second win on the trot, overcoming Wyndhamvale by 23-points.

Manor Lakes were too strong for West Footscray, keeping the Roosters scoreless in a dominant 100-point win. Kirsty Hobbs and Yana Frontczak each kicked four goals for the Storm.

The clash between Hoppers Crossing and Yarraville Seddon rounded out the weekend, with the Warriors running over the Eagles 13.15. (93) to 1.0. (6).