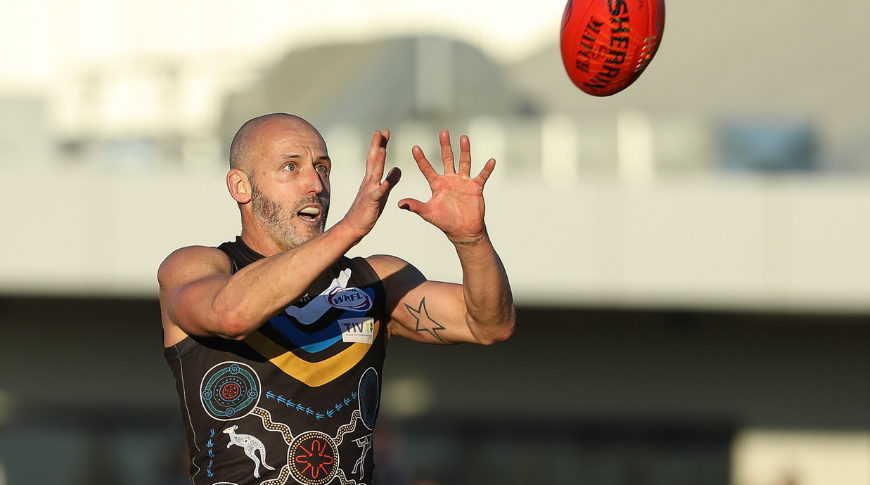 After another lockdown brought local footy to a halt, TIV Division 1 was back, with all sides eager to make up for lost time with finals drawing near.

It was Caroline Springs who sent the biggest message of Round 15’s action, knocking over an in-form Spotswood by 16 points. It was the Woodsmen who started strongly, keeping the Lakers goalless in the first term, while Spotswood added four majors of their own.

While Mitch Coleman and Stephen O’Bryan were firing for the Woodsmen, Liam Read and the Lakers came storming back to tie things up at half-time. From there, it was a battle that Caroline Springs were able to emerge from, with Stephen Brewer and Read immense for the Lakers.

Altona remain a game clear at the top of TIV Division 1, with a dominant 89-point win over Sunshine. The win also assisted the Vikings’ all-important percentage, amongst a crowded top portion of the ladder.

Just behind in second position are Werribee Districts, who kept the pressure on the ladder-leaders with a 52-point win over Deer Park. An eight-goal opening term for the Tigers set up an impressive performance, with Harley Blake and Ben McMahon leading the way for Chris Gillham’s side.

Andrew Panayi continued his excellent season with another four majors, while Deer Park were left to rue their inaccuracy, kicking 5.17 on the afternoon.

The Lions will take on Point Cook next weekend, who went down to St Albans by 28-points. An 11-point lead for the Bulldogs at half-time had a potential upset brewing, as Connor Mckenzie and Elliott Wood starred for Point Cook.

However, the second half belonged to St Albans, with Ben Hurley and Jack Sims instrumental in securing a tough win for the Saints to keep a 2021 finals appearance on the cards.

St Albans face a tough test next weekend, as they clash with Hoppers Crossing, who were ruthless in their 73-point win over Yarraville Seddon. After a close first quarter where the Warriors only led by four points, Hoppers Crossing were dominant from then on.

Brenton Payne extended his lead atop the goalkicking leader board with another six majors, while Daniel Riosa and Ashlin Brown were brilliant against the Eagles.