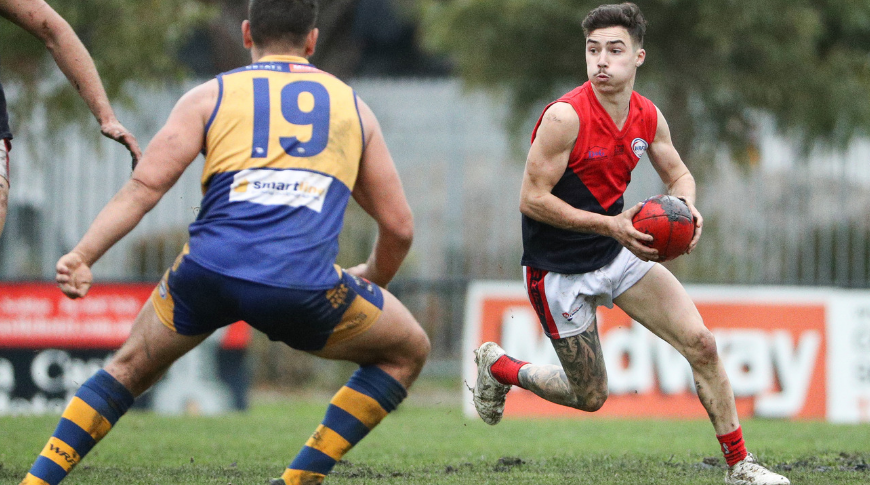 RAMS Division 1 action was at fever pitch over the weekend, highlighted by an enthralling six-point win for Werribee Districts over Spotswood.

After trailing by 35-points, Werribee Districts turned it on with a seven goal third-quarter that had the home crowd in a frenzy. More specifically, the third term belonged to one Districts player – Nick Buykx.

Buykx, in a new role forward of the ball, put on a show with five majors for the quarter. Every goal was momentous, but the fifth was particularly special. After breaking two tackles and dodging several Woodsmen, Buykx swung onto his right foot for a 40m snap that drew an almighty roar from the Districts faithful.

Spotswood were able to fight back from their 14-point three-quarter time deficit, closing the gap to single digits. However, Werribee Districts managed to hold on for a thrilling one goal win, thanks to one of the best individual performances of RAMS Division 1 this year.

Werribee Districts will be galvanised by this performance, as they travel to Deer Park next week. Meanwhile for Spotswood, they’ll have the chance to bounce back against St Albans.

The Saints were challenged in their trip to Sunshine, but showed their class in the last quarter, with an 22-point win. St Albans ruckman David Kovacevic was outstanding in the victory, continuing his stellar 2019 season.

Sunshine will hope a fourth win for 2019 will be on the cards next weekend, when they take on Albion.

Under the Saturday night lights, Caroline Springs were too strong for Albion, notching a 64-point win. Lewis Tudor was excellent for the Lakers, alongside Paul Medhurst who kicked three majors.

With Spotswood’s loss, the Vikings now sit two games clear on top of the ladder, and will look to secure a second consecutive minor premiership in the coming weeks. Point Cook will get their chance to rebound, when they take on Hoppers Crossing next weekend.

The Warriors were able to recover from last week’s poor performance against Spotswood, taking down reigning premiers Deer Park by 34-points in a terrific display.

Hoppers Crossing came back from a 19-point half time deficit to run away with the game, as Deer Park lost Division 1 goalkicking leader Jase Perkins for the second half. Ashlin Brown and Daniel Nielsen starred for the Warriors, who will hope they can join the top five next weekend, as they now sit level with St Albans and Deer Park on nine wins.