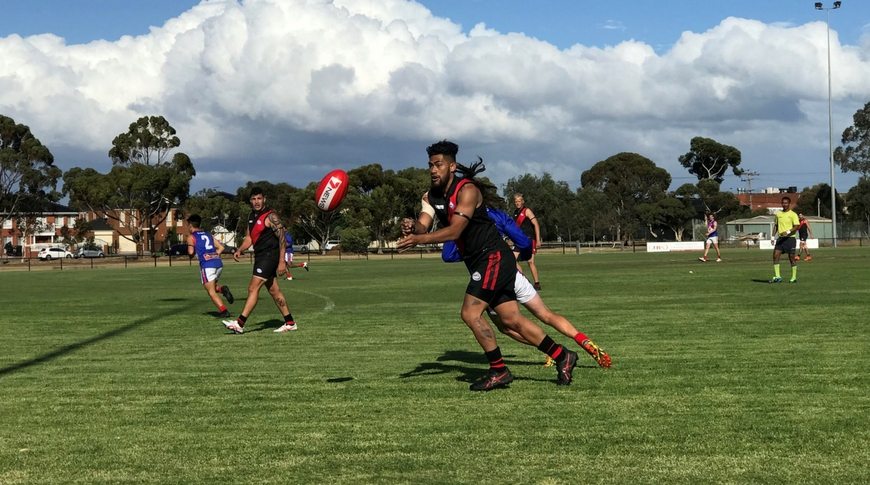 Swirling winds didn’t stop Braybrook and Sunshine Heights from beginning their 2018 campaigns with a hard-fought battle at Pennell Reserve, in what was less than ideal conditions.

Dragons’ coach Damien Farnfield urged his players to up their aggressiveness and “get it on the scoreboard”, knowing that inaccuracy had quelled chances of an early lead.

Daoud Diab and Dalton Tonkin led Sunshine Heights’ endeavours, with both teams working hard to get ball movement through the corridor for more direct scoring opportunities. Jake Warwick and the Braybrook defence held up strong, to set up Braybrook’s growing assertion over the contest. After the main break, Braybrook’s other new recruit Mark Tasiyan was hard to stop up forward, kicking two goals in the third quarter. Braybrook’s forwards proved to be the difference on the day, helping secure a 12-point win for the Brookers.

In Wyndham, the wild weather kept the Suns clash with Tarneit to a low-scoring affair. Rhys Kirk and Daniel Hovey impressed up forward kicking two goals apiece, while Chris Benson matched their tally for Tarneit. Wyndham came out strong early and from the second quarter, started to widen the gap through the brilliance of Lachy Sammut and Mason Taylor. The Suns eventually proved to be too strong for Tarneit, securing a 25-point win.

Elsewhere, Point Cook Centrals would have secured a much larger win over Glen Orden if not for inaccurate kicking, but still would be pleased with their 27-point win. Glen Orden will be eager to atone next week against Sunshine Heights while Point Cook will hope to continue their form against Wyndham.

In Laverton, despite strong play from Jamie Davis and Cristopher Jon May, the Magpies were simply outclassed by North Sunshine, going down by 54-points. Braybrook take on North Sunshine next week in what proves to be a must watch contest, while Laverton will look to bounce back in Tarneit.