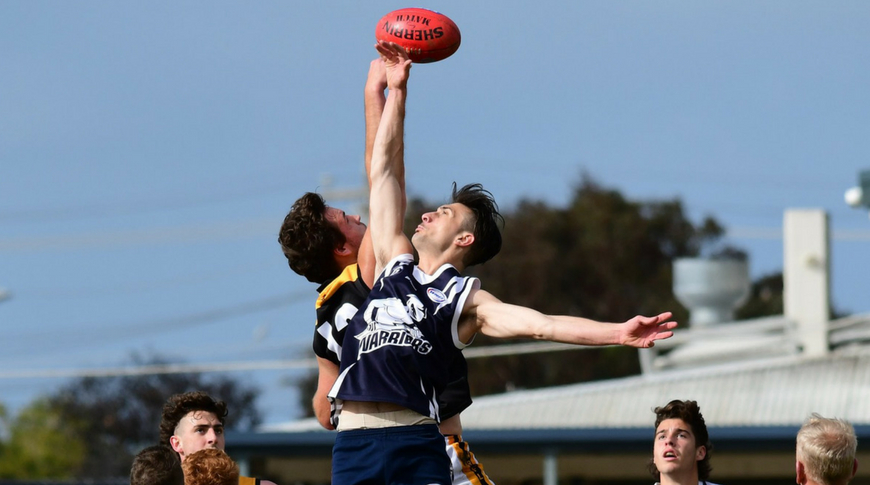 Round 5 of the Western Region Football League TIV Under 19 competition started to help identify the heavy hitters in the competition, as Caroline Springs and Altona cruised to big victories.

Meanwhile, Werribee Districts and Hoppers Crossing fought out a gritty, low-scoring encounter that saw the Warriors walk away with a narrow eight-point win.

The Hoppers Crossing outfit showed composure in the 6.13. (49) to 6.5. (41) victory, after a late final-term scare from the visitors. After leading by three majors at the final change, Werribee were almost able to overrun the home side, but simply ran out of time.

Brendan Neville was best on ground for the winning side, while Rhys Boys kicked two goals. For the visitors, Chad Buck was dangerous up forward with two majors, while Mars Lester worked tirelessly all day.

From the opening bounce, the Lakers appeared to be in complete control, as the Power remained scoreless at the main break. This theme continued throughout the second half, as a nine-goal final quarter proved to be the exclamation mark on an emphatic victory.

After a relatively even opening stanza, a seven goal to none second quarter set up the victory for the Vikings. Jawad Jawad kicked three, while the competition’s leading goal scorer in Daniel Pantalleresco also kicked three.

Michael Rubino and Thomas Langham were highly influential around the ground, throughout the clash. For Point Cook, Connor De Brincat and Aidan Van Der Linden toiled hard against the uncompromising Altona outfit.

Spotswood had a well-earned weekend off with the bye, and will look to resume their season against Point Cook next week.