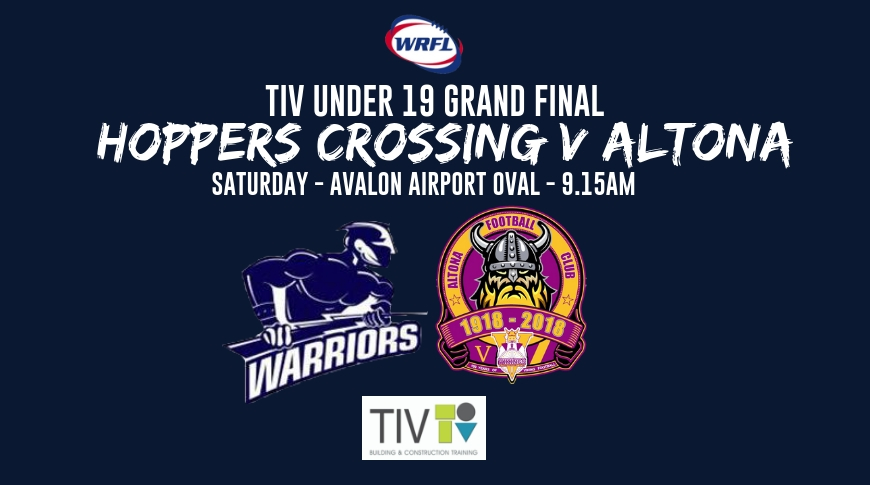 SHAUN Ellis and his Hoppers Crossing team has overcome several hurdles in 2018.

There is just one more hurdle to come, and that is Altona, this Saturday in the WRFL TIV Under 19 Grand Final.

“We had a number of injuries, but most of those boys have fought their way back to fitness and form and will be a part of the Grand Final team,” he said.

“Those injuries meant other players had to step up and cover, so I think we’ve become a more versatile and resilient team as a result.”

The Warriors defeated the Vikings in the Under 19 Second Semi Final two weeks ago and have been busy preparing for the Grand Final.

“The players have been excited ahead of the big game and we’re really look forward to taking on Altona again this week,” Ellis said.

“We’ve played each other four times so far this year and all the games have been close and hard fought so we can’t wait for the challenge.

“A lot of the boys have been playing together at Hoppers since their early days in junior football so they’re a close knit group.

“I’ve coached most of the boys for three or four years now so to help them win a flag together would be a highlight of my footy career.”

Finally, Ellis wanted to thank the team behind the team, the volunteers who help out each week.

“Without the many helpers around the team we wouldn’t be able to run out and have a game each week,” he said.

“Thanks to Craig, Al, Craig, Cheri and Anne for helping out each week with the main jobs and to our parent volunteers who step up when asked to help us get the boys on the ground, without your help we couldn’t get as far as we have. You’re all a huge part of our success this season.”

AFTER overcoming Caroline Springs in last weekend’s Preliminary Final, Altona is preparing for a Grand Final and a shot at going back-to-back in the TIV Under 19 competition.

Coach Dean Callaway said the players are excited about the opportunity and are focused on putting their best foot forward on Saturday.

“There’s a strong belief amongst the players that they can achieve something special together,” he said.

“Winning a premiership would be rewarding, especially knowing how much the players have worked for it and the effort from everybody involved off field from our committee people to our volunteers.”

“To the volunteers/parents that help out on game day.  Without their support we wouldn’t be playing games over the weekend.”