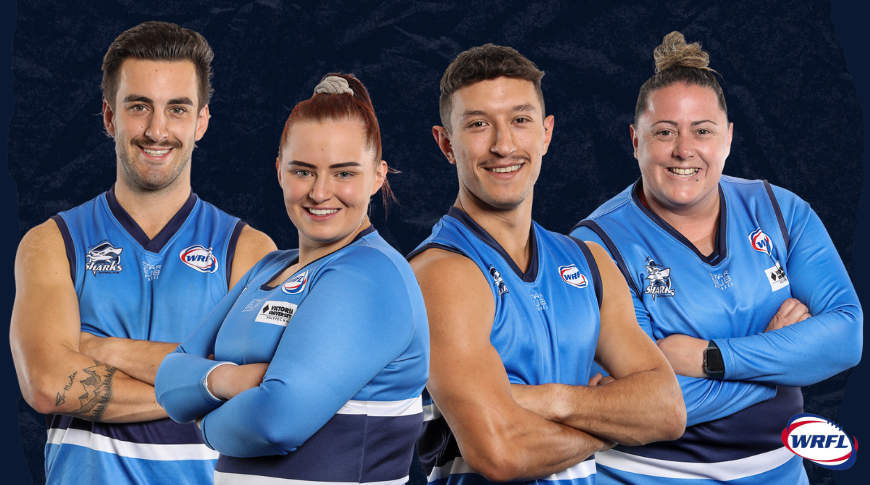 In the face of a fresh, new footy season, the Point Cook Centrals Senior Women are bringing the vibe — with high spirits and team camaraderie a key feature of their 2022 campaign. After the disappointment of a cancelled finals series, the Sharks are keen to crack in, and are out to finish what they started in 2021.

The Sharks’ Head of Women’s Football, Leanne Meyer, is back for another season as coach, and was impressed with her team’s resilience and care for each other, particularly in a difficult year off the field.

“We welcomed some brand-new players last year and they quickly became part of the Shark sisterhood,” Meyer said.

“Whilst we always have a ‘team first’ mentality, it was super pleasing to see a handful of women make the WRFL Team of the Year, as well as Maddi Johnson claiming equal Leading Goal Kicker.”

Point Cook Centrals is known for their tough attack with the footy, and Meyer says that the group will continue to play for each other in 2022.

As they near Round 1, Meyer has challenged her playing group ‘to be 1% better, every week’ and really seek out success in Season 2022. Will the Sharks united front and pressure-fuelled play be key to a finals berth?

Don’t miss their season opener against Wyndhamvale on April 10.

New Point Cook Centrals coach Dean Chambers says we should expect to see a more consistent Sharks team in 2022, saying there will be an even contribution from the playing group each week.

Chambers joined the Sharks at the end of last year, taking over from premiership coach Darren Findlay.

“Having watched the Senior team from a far through having invested sometime within the junior programs, the timing was right for both Point Cook Centrals and a fresh coaching team to re-energise the playing group in 2022,” he said.

“We are encouraged on what we have seen thus far, and we are very much looking forward to the opportunity to build on from where we finished from previous seasons.”

As well as adding a new coaching group, the club has also recruited some exciting talent, Jordan Bennett, Mitch Palma and Daniel Strnak. Palma and Strnak were both named in the Division 1 Team of the Year in 2019.

Chambers said he was also looking forward to seeing the development of the club’s younger players.

“We are excited to see the improvement of our core group of younger players in Cale Du Plessis, Nathan Volk and Max Harris,” he said.

“They have invested heavily over the summer and are keen to become much more consistent players in 2022.”

Point Cook Centrals will take on Glen Orden in Round 1.

“It looks as though all of the Division 2 clubs have been quite active over the break by adding some quality players to their lists,” he said.

“This will again raise the standards of an already strong division two comp.”