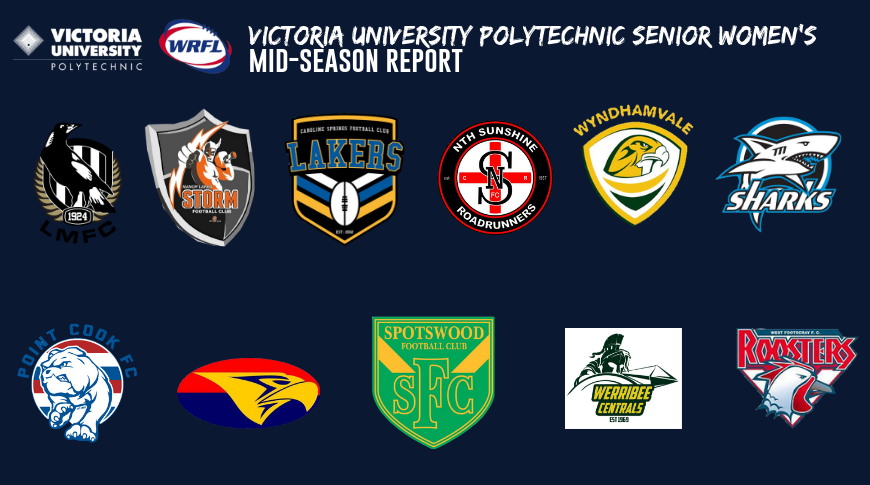 At the halfway point of the 2019 season, WRFL Media Manager Kristen Alebakis speaks with some of the Victoria University Polytechnic Senior Women’s coaches about how their club is tracking after nine games, what their goals are for the remainder of the year, plus all coaches grade their teams.

“I think we have had a rough, but fair start to the season, starting off the season on a high with a win against Tarniet really got the girls up in spirits, however we still seemed to lack composure and stability when handling the ball in high pressure situations,” Laverton coach Mason Ahumada said.

“All credit is due to the girls for working hard over the last few weeks so I am satisfied as a coach and believe the girls are on right track at this point in the season considering losing some players due to injury and unforeseen circumstances.

“I am very excited to see what we can do in the second half of the season as the girls have been working very hard at training and have continued to show massive improvements on and off the field.”

“It’s been a tough start for us this season with a lot of breaks and not much football,” coach Nathan Smithwick said.

“We’re just coming off three games in over seven weeks so our match fitness hasn’t been as good as I would like.

“I feel as though to still be undefeated at this stage with a tough game in Caroline Springs this Sunday with the amount of players we have lost shows how good our depth is.

The new players have developed extremely quick which is a credit to themselves with all the extra work they put in. The experienced players have gone to another level and just keep amazing myself and the other coaches week in week out.”

“I am very happy, we have good numbers at training and all the girls are invested in what we are trying to do, so it is a really exciting time,” Caroline Springs coach Colin Clohesy said.

“Our focus is to continue to improve so we can get stronger and be ready at the end of the season to play our best footy.

“We really want the players to say they learned something this year, it isn’t about the wins and losses.”

“We have around 10 ladies who have never played before and almost as many who are only in their second season,” coach Rob Telfer said.

“The steps we have made to date are hard to believe if you haven’t been with us the whole season. The passion for learning and the determination to get it “right” is second to none.

“Having enjoyed our first win of the season last week all the hard work is paying off. We have been close in a couple of prior games but our strongest strength is we never stop no matter what the score is.”

“We are a bit behind the eight ball, however the majority of our girls have never picked up a football in their life,” coach Michael Woolard said.

“Each week we see improvement from the girls. Injuries has really hurt our season.

“However the girls have stuck together and are improving week by week. A little more commitment from the girls will see a big improvement.

“We are also on the search for more players who are looking at having fun, learning and developing their skills.”

“At this stage of the year I think we are tracking along okay, we have a lot of improving to do in a few areas in order to close the gap with the best teams in the competition,” Werribee Centrals coach Glenn Ballard said.

“We had a solid pre-season even though it’s our second year the group has vastly changed since last year not just with numbers, but with improvement of skills and knowledge of the game.

“Over the last month team cohesion and understanding of our structure and game style has definitely started to show in our performances.”

“I’m pretty pleased with where we are at, being a very inexperienced team our improvement has been really good throughout the season and our competitiveness against all opposition has been a credit to the girls, who are still developing and very keen to learn the game further,” Yarraville Seddon Eagles coach Peter Lazzaro said.

“We are certainly looking forward to the second half of the season, as a group we believe we have more improvement and more competitive games ahead.”

“This season has been positive, we have really focused on building from last year, which was a really successful season after making finals,” West Footscray coach Leigh Ritchie said.

“Our new payers have been really good a lot of the second year players have improved their skills and taken on more responsibility.”

“I’m pretty happy with how the group has gone, it has been exciting,” coach Theo Theodorou said.

“We have had six players from our Under 18’s come up into the Senior side.

“The focus for the second half of the year is to get better, we had our first loss on the weekend, and we don’t want too many of them. We just want to get better.”

“We are about where we thought we would be at this stage,” Point Cook coach Kerry Saunders said.

“We have played some top teams and lost to them and we have lost to teams who we thought we could have won against.

“The aim for the second half of the year is to get back on the winners list. We are entering a block of time that is pretty cold, rainy, people get injuries and go on holidays, so what we have said is that we are starting again from here. Whatever has happened has happened, we go again now.”

“Combining a large amount of first year footy players, new players to the Sharks and last year’s inaugural players we have all been loving the challenge of season 2019 so far,” coach Leanne Meyer said.

“The halfway mark brings obstacles like trying to keep the sickness away and a few major injuries, but the passion to play football remains the same and I believe this is due to the camaraderie amongst the group; and that is still growing.

“We are looking forward to some consistency with games and seeing all teams improve throughout.”